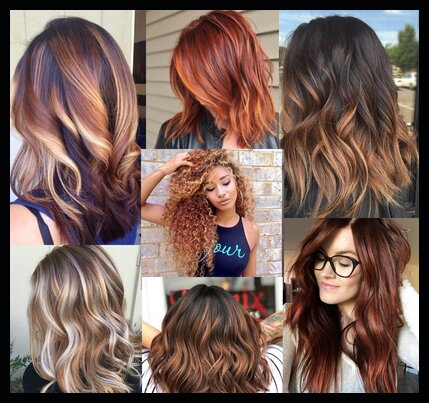 Cinnamon hair is usually described as a medium brownish color with warm red or orange undertones. Cinnamon hair color can be done in a variety of different ways, because that comes in a range of shades ranging from light to dark, making it a universally appealing shade.
If you are tired of doing the same color every time then you can opt for Cinnamon Cocoa Hair Color. Today we will share some classic Cinnamon hair colors names so that you can easily get your desired color.

Let’s talk about Cinnamon cocoa Hair Colors. This is true that the natural color is always the best. But hair coloring makes you look more trendy. And if the color is Cinnamon Cocoa color then no doubt you will be satisfied with your look. Cinnamon hair has a warm brown base with peppery, copper tones. With this cinnamon wash, you might opt for an elegant appearance or go for that with a vibrant red hue. Check out this stunning shade if you’re wondering about what a genuine cinnamon hair color looks like. The Cocoa Cinnamon hair color! This is a gorgeous hair color. It begins with an ultra-dark base that is lightened with burned cinnamon highlights. This one is also a beautiful cinnamon cocoa hair color. You can dye the cocoa-cinnamon highlights into your stylish curly hair or curly bob hair. This brown hair is also a stunning one! This classy, toasted cinnamon ombre hair color will keep your chestnut brown hair looking amazing for formal events or work. You should try this once! The Cinnamon and Pumpkin Tones is a dreamy color mixture across the lengths for vibrant autumn color. This is a color that Bella thorn has! A fantastic hair color that you can try too. For having a bold hair look Cinnamon Red hair can be the perfect shade. Actually, Cinnamon brown hair provides the perfect balance between brunette tones and red hair Blend the perfect tones of dark chocolate and cocoa cinnamon, make deep brown shades which will be types of seductive and darker shades. For hair coloration,  a rich dark cocoa chocolate cinnamon hair color with mild cherry undertones is certain to give some zest to your locks. If anyone wants dark hair or dark tones then they can simply opt for Cherry Cinnamon. For people with bangs, an all-over cinnamon hair dye is actually an excellent pick. This one is another beautiful Cocoa Cinnamon Hair Colour.

Except for these brown hair colors, you can also try Cinnamon Red Melt which is perfect for those who have darker hair want to add some dimension. The mix of highlights enhances your natural color. Cinnamon Braids is perfect for you if you dye your hair Cinnamon Cocoa color with braided hairstyle.

Then if you want to make your curl pattern pop then Cinnamon Curls hair color can be a good choice. In the list of best Cinnamon hair colors, Cinnamon Rose Hair is another one that you can try. It’s a romantic rose gold color that can give you stunning beauty. After that,  there comes Sleek Cinnamon Hair which is a Cinnamon color that is sleek and shimmery, and it glides smoothly from one hue to the next. and Bronde Cinnamon Hair also called sun-kissed bronde color. It’s a lighter end of the cinnamon hair color range. Fro adding brightness to your hair and with light blonde highlights and a range of brown tones, you will get a stand-out look of hair for sure.

Or you can also try blonde highlights like Cinnamon Blonde Hair which is beautiful as any other shade. It will give you fantastic blonde tones. or opt for Gold Cinnamon Hair which is a low-key dark brown hair color shade. This is a lively golden cinnamon highlight that can give you the perfection of look.

Not only these shades but also you can pick some other Cinnamon Cocoa Hair Color as well. But according to us, our recommended colors are the best of all. For the customer’s benefit, we are suggesting the best hair dye that you can use. The product is Schwarzkopf Ultime Hair Color Cream, Cinnamon Brown. A super gorgeous fade-resistant intense color is available in vibrant color.

That’s all about 10 Best Cinnamon Cocoa Hair Color. Every single shade is super gorgeous. Whether you have naturally black hair or brown hair or blonde or whatever it is! You can simply dye your hair Cinnamon Cocoa Hair shade. Just pick the perfect one according to the skin tones.

Q. What is the best Cinnamon Cocoa Hair Color?

Q. What is hair coloring?

Hair coloring, commonly known as hair dying, is the process of altering the color of someone’s hair. The most common reason is to cover gray hair. Also, people color their hair to get a more trendy or desired hair color shade, or to restore the old hair color after it has been affected by hairdressing or sun bleaching.

Q.What are the types of hair coloring?

Q. What is the best hair coloring idea?

Ans. There are plenty of hair color shades anyone can try according to their skin tones. We are suggesting the most trendy and fashionable hair color idea that you can follow.

Ans. Hair coloring is a good idea to get a trendy look. But it’s important to pick a good quality hair coloring product so that you don’t have to face any hair problems when you color your hair. We are suggesting the best hair color products that you should pick.